It's been an exciting summer here on Cape Cod! 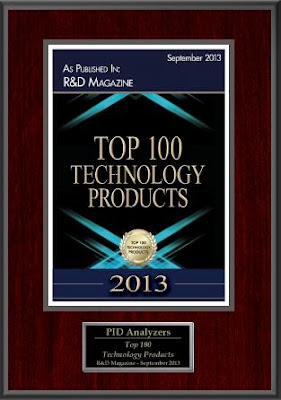 I am delighted to announce that our small Cape Cod based business,  PID Analyzers, LLC, has been selected as a 2013 recipient of the prestigious Research and Development (R and D) 100 Award for the development of our Model 33 arsenic in water  and food analyzer in the laboratory equipment category. The "R and D 100 Awards recognize the 100 most technologically significant products introduced into the marketplace over the past year" according to the press release issued by Research and Development  Magazine. In addition to our business receiving this honor,  my father and business partner, Jack Driscoll, as the developer of the winning product, received  special recognition at the awards ceremony on November 7, 2013 in Orlando, FL. 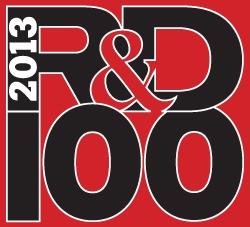 Here is a full list of the 2013 winners. Note that this is a really big deal to win an R and D 100 award and that our small, privately-held Cape Cod business competed against publicly traded companies as well as National Laboratories. These are a few of the *household names* on the winners list: General Motors, Dow Chemical and Olympus. Note that we had the opportunity to participate in the R and D 100 Awards Industry Roundtable on the morning of the awards banquet. Read more about that including participants here.

As a remarkable  followup to our R and D  100Award announcement the FDA announced  that they are that they are proposing a decrease in the  action level for arsenic in apple juice from 23 parts per billion (ppb) to 10 ppb and the PID Analyzers’  R& D Award winning Arsenic in Food and Water analyzer can detect arsenic down to 100 ppt or 1% of the standard! 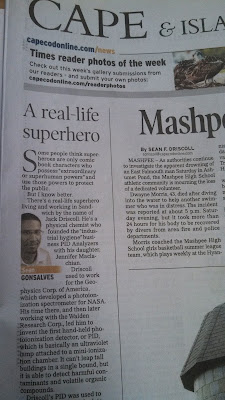 Cape Cod Times Columnist Sean Gonsalves featured my father, Jack Driscoll and his work as a chemist in his July 23, 2013 column dubbing him "A real-life superhero". Sean did such a marvelous job in his portrayal of my father so much so that you can even hear my father's enthusiastic Boston accent throughout the piece.

We've gotten to know Sean over the past couple years since he has taken an interest in our scientific outreach to our local community via the Cape Cod Science Cafe.


When we shared the link to the column on our company Facebook page, we received nearly 1,600 likes and more than 100,000 people had seen the post.
My father had dozens of offers to send him a *superhero* cape. Nearly twenty people remarked on what a skilled writer Sean Gonsalves is. A week after the column was published, one of our vendors stopped into our place wanting to shake hands with a real life superhero. His wife had seen the article in the paper and said to her husband "don't you know  this guy"?
The ultimate was this letter of congratulations from Governor Patrick. 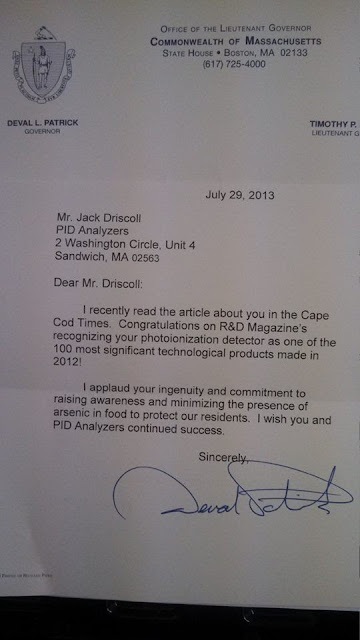 Chemical and Engineering News, a trade publication with a circulation of 164,000 chemists,  ran a feature article in their May 6, 2013 issue titled "Eating Arsenic" about the  Arsenic Contamination in Food and Water  two day symposium at the American Chemical Society Spring National Meeting on the Agricultural Food Chemistry Division track that I organized along with scientists from  FDA and USDA. There were more than 40 papers and ours was one of 9 selected to be in the article as well as featured in the onsite press conference. 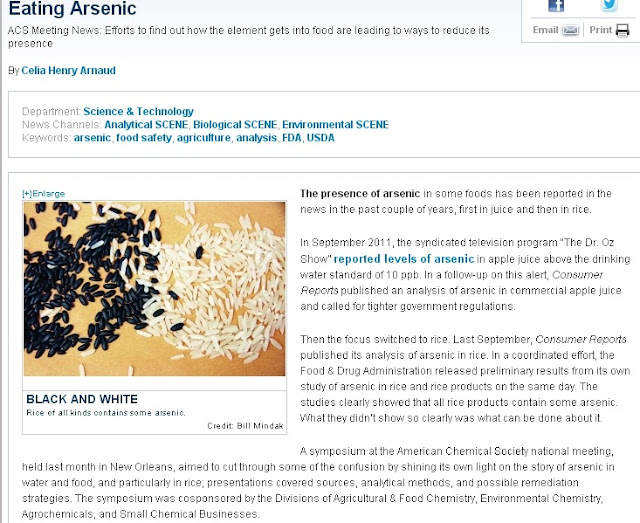 Thanks to my friend, David Still, II, my new friends at our local newspaper, The Barnstable Patriot, did a nice story on us when we got back from the Spring National Meeting of the American Chemical Society in New Orleans. Here is a link to "Father-Daughter Team Find Good Chemistry".

We ran this press release on August 21, 2013 via Business Wire In under two hours it had been picked up by the following:

As well as a dozen others.

Below is an embedded link to the award winning product brochure which describes our arsenic in water and food analyzer in greater detail. The Model 33 Arsenic in Water and Food Analyzer technology is based on hydride generation (reduction) followed by the separation of inorganic and organic hydrides by gas chromatography and detection by the classical photoionization technique developed by PID Analyzers, LLC. This method can detect inorganic arsenic down to 100 parts per trillion (ppt) and is a tenth of the cost of the current instrumentation technique: inductively coupled plasma/mass spectrometry (ICP/MS).
Award winning analyzer for the analysis of arsenic in food and water by Jennifer Maclachlan

Benefits of a Division of Small Chemical Businesses membership

Northeast Regional Meeting of the American Chemical Society #NERM2013
Organized and presiding over the ACS Division of Small Chemical Businesses technical program which includes three half days of flagship programming including Resources for Startups, Best Practices for Chemical Entrepreneurs and True Stories of Success from Chemical Entrepreneurs.

My presentations at #NERM2013:

So you're Linked-In, now what?

The following highlights my participation at #ACSIndy 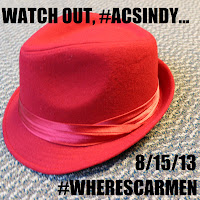 
Symposium organizer for the ACS Division of Environmental Chemistry ENVR: 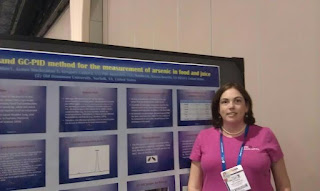 Earlier in the year:

Facilitated a career workshop at AAAS Boston called Entrepreneurial Cravings? Learn how to satisfy them


Organized and presided by Jennifer Maclachlan: Arsenic Contamination in Food and Water

Organized and presided by Jennifer Maclachlan: Advancements in Air Monitoring 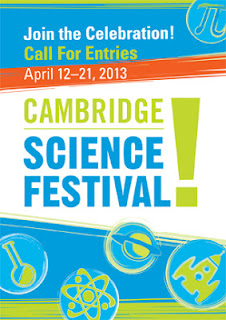 Cambridge Science Festival
Session organizer. Session that I organized on Climate Science: The Conversation had to be cancelled due to the Boston Marathon tragedy.

Participated in Science Carnival. Provided the same materials/experiments that were used at the Cape Cod Museum of Natural History Science on the Street event. See blog post about that here.

This portion was written jointly by Jack Driscoll and Jennifer Maclachlan and submitted as part of the quarterly PR report for NESACS.
February 16-17, 2013- Family Science Days at the American Association for the Advancement of Science (AAAS)Meeting, HynesConvention Center Boston MA This spectacular science outreachevent was sponsored by AAAS and co-sponsored by the Cambridge Science Festival. This free two day event was attended by 3,700 people. The American Chemical Society: Northeastern Section of the ACS (NESACS) together with the ACS Division of Small Chemical Businesses(SCHB) reserved and staffed a booth. The ACS Office of Public Affairs provided several hundred copies both of Kids Discover Chemistry Magazine and the Celebrating Chemistry Nanotechnology National Chemistry Week handout in addition to Chemistry Ambassador sashes, stickers and pins for distribution at this event. There were more than 60 organizations at the Family Science Days. 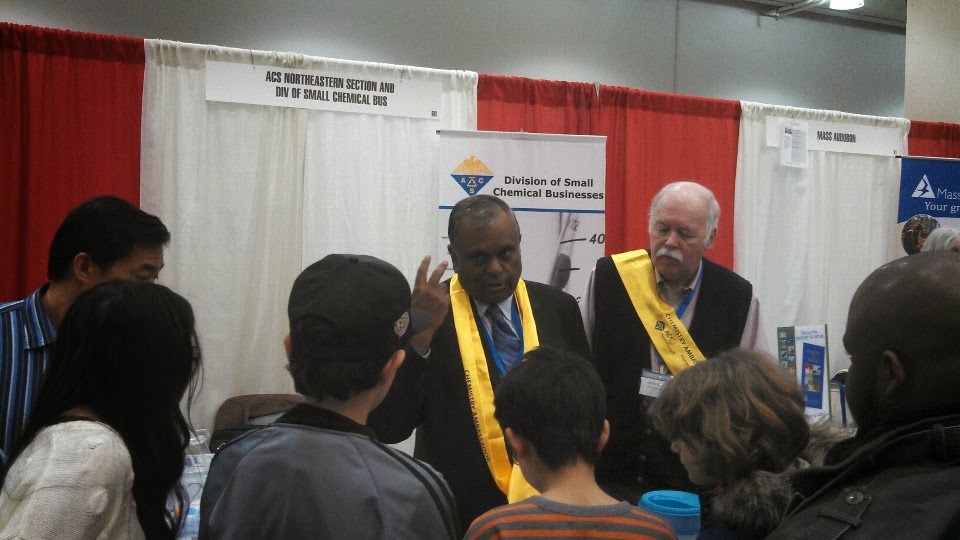 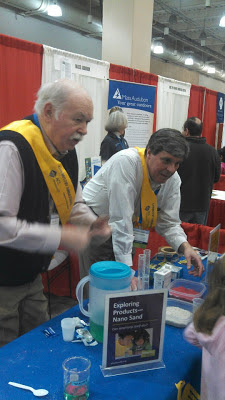 Our hands-on materials were provided by NESACS National Chemistry WeekCoordinator, Chris Jaworek-Lopes. David Sittenfeld of the Museum of Science not only donned a Chemistry Ambassador sash and put in volunteer hours at the booth, he also arranged for us to borrow the Museum of Science demo kits that we utilized in addition to the NCW supplies. We had three experiments: sunscreen, surface area and nanosand. The latter was the most popular. I mentioned to booth visitors that the ACS had some very educational nanotech videos on their YouTube channel. When thanked for his time at the booth, Mark Jones (pictured right above next to Jack Driscoll) replied that the experience was 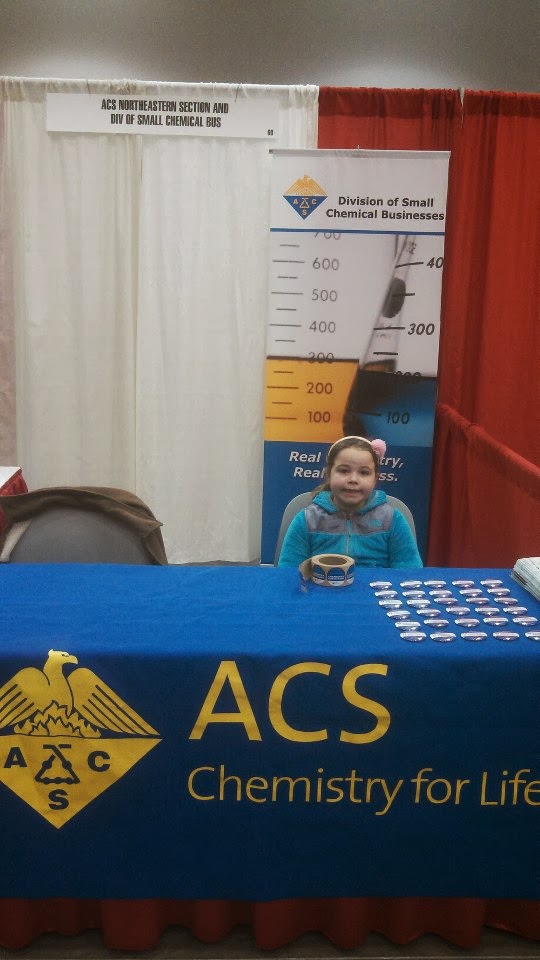 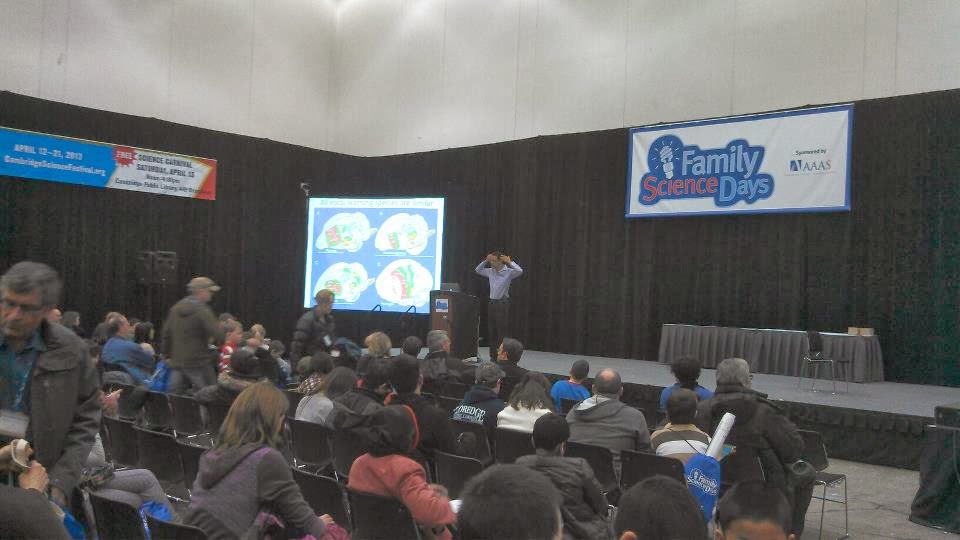 “surprisingly enjoyable”. Mark Jones acted as a Keynote speaker at the 2013 ACS Central Regional Meeting (CERM) and was volunteered to us by his Dow Chemical colleague, Katie Hunt, 2007 President of the ACS, who knew that we had booked an ACS table at this AAAS event. We had about 350 parents and children visit us on the first day and about 250 on the second day. The audience was primarily K-6 but we did talk to several sophomores about careers in chemistry. One Post Doc mom asked me whether I would make a video to invite her 6 year old son to the Expo the next day. I did that and met her son the next day. On Sunday, Lisa Shatz from Suffolk University, brought a number of EE gadgets including a Mendocino motor driven by a flashlight, solar cells and magnets, a robot, a Gauss meter, a magnet & a tube of iron filings that could beused to demonstrate a magnetic field. We were graced with the most amazing volunteers from the ACS Small Chemical Businesses Division, Northeastern Local Section of ACS (NESACS), Mid-Hudson Local Section of  ACS, Dow Chemical (MI & MA), Suffolk University Department Chairs including a Trustee and Museum of Science Boston (MOS).We couldn't have staffed the six hours each day(Saturday and Sunday) without this team of volunteers: Mukund Chorghade, Jack Driscoll, Chris Gilmore, Mark Jones, Jennifer Maclachlan and Family, George Ruger, Lisa Shatz, DavidSittenfeld, Sonja Strah-Pleynet and Family,Tricia Vickrey and Dennis Walczewski.