The PID Analyzers Field Portable Analyzer Product Line now has optional Bluetooth Capability. A real-time analyzer has never been so easy to use, application dedicated and so convenient. Features of our Bluetooth enabled analyzers include a wireless range of 330ft/100m, the ability to monitor 1-5 channels simultaneously, save and download manually collected data later and continuously monitor & collect data from numerous analyzers using a single PC. Data is collected graphically and date/time stamped in MSExcel format for ease of importing.
at September 29, 2010 No comments: 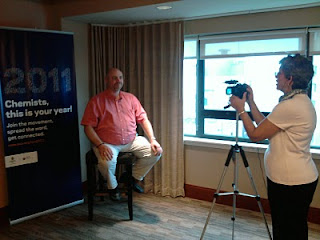 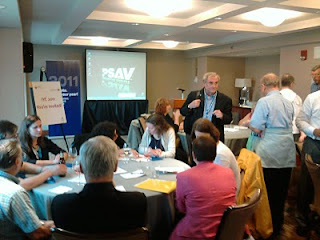 "The International Year of Chemistry (IYC) 2011 is a worldwide celebration of the achievements of chemistry and it's contributions to the well-being of humankind...The IYC is intended to reach across the globe, with opportunities for public participation at the local, regional and national level"-Source http://www.acs.org/IYC2011

At the ACS National Meeting in Boston on August 24, 2010, the ACS IYC Committee Organized a Workshop to introduce ACS members, ACS Volunteers/Section Leaders and attendees of ACS National Meeting to the year long celebration of chemisty. An overview of the concept was presented at the podium and each table had an ACS Staff member at it to guide the participants through a particular section of the tool-kit. This of course stimulated conversation and brainstorming at each station. The participants were encouraged to ask questions and take the materials with them as they moved from table to table.

The more daring folks opted for an official IYC 2011 T-Shirt and subsequently had to wait in line for a video interview. Of course Ken Grant (pictured on the right above) and I were up to the task. The topic of discussion on video was: "How Do You Plan to Celebrate IYC"? Of course I spoke about how I nominated my father, Dr. John N. Driscoll, for the 365 Days of Chemistry as an important contributor to Chemisty for his commercialization of the photoionization detector (The Father of Photoionization as we refer to him). Additionally, my father and I are huge proponents of education and we plan to initiate an IYC event on Cape Cod and introduce the materials from the tool-kit at the K-12 and college level (at Cape Cod Community College).
Join us now and Celebrate Chemistry in 2011! Click http://www.acs.org/IYC2011
at September 12, 2010 No comments: