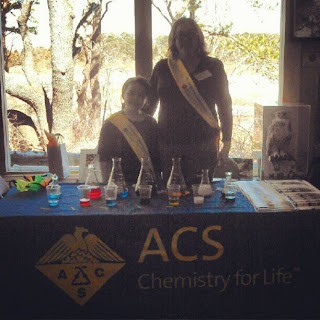 I spent Saturday afternoon at the Cape Cod Museum of Natural History participating in the Cambridge Science Festival, Science on the Street STEM outreach event. This was an event I had planned to attend with my family but instead we ended up as exhibitors, representing the American Chemical Society. My eight year old daughter enjoys the VIP experience of working at a science festivals for several reasons: getting there before the public is allowed to enter, as the kid of a volunteer she gets to check out and try all the cool activities before everyone else since the other exhibitors are eager to practice on a real kid before the rush and the best is of course having a place to come and rest between doing fun activities. 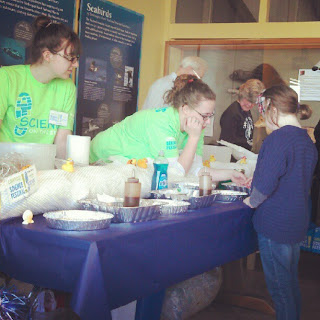 Since both of my girls had planned to assist me at the ACS table, I told each of their teachers about it. The second grade teacher suggested I make a flyer that she would send home with the students in the class plugging the event with a call-out box stating that their classmate would be at the Chemistry Table and we hoped to see them there. As a result of the flyer, my six year old had one classmate attend and my eight year old had two classmates attend. My friend's mother who is a Naturalist and had business at the Museum in the morning stuck around to see us setup since her daughter saw on Facebook that we'd be there. She also noted with a wink that she already knew because she saw it on Twitter. Other friends of ours stopped by because they saw my Facebook posts about it. There was something really special to me and to my girls about seeing so many friends at this event in our community. Oftentimes when we are assisting at Local Section outreach events they are in Boston or Cambridge and have a sort of anonymity to them. 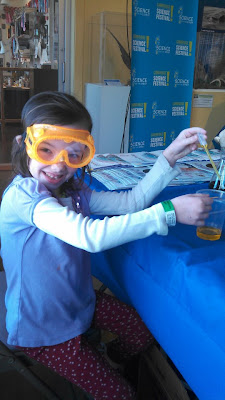 A retired chemist ACS member appeared at my table. He was delighted to see ACS at the event and wondered if we were down the Cape or had come from Boston? I gave him all my contact information and told him about our NESACS Cape Cod Science Cafe events. I would have liked to have spoken to him longer but I had a table full of pint-sized chemists demanding my attention.

First they were asked if they wanted to do some chemistry and then if they answered yes were instructed to wear goggles to protect their eyes since we were working with liquids. Then if they didn't know how to use an eyedropper (many didn't since most kids were between ages 3-7) they got to practice with it before squeezing drops onto the pH paper, matching the color change portion of the strip with the pH color number chart and then using a meter to compare the results. I was able to have five kids at a time conduct their experiments at my table with the help of my six year old who cleaned up between experiments, assisted children who needed it (even kids older than herself) and kept restocking the Kids Discover Chemistry Magazines.

Of course I was met during the one brief lull with a concerned citizen who was inquiring as to whether or not it was *safe* to expose children to toxic chemicals. She gestured towards my red flask which was full of salt water from Barnstable Harbor. And then to the purple flask full of cabbage juice then to the green one with vinegar, well you get the picture. She wandered away from the table looking relieved. 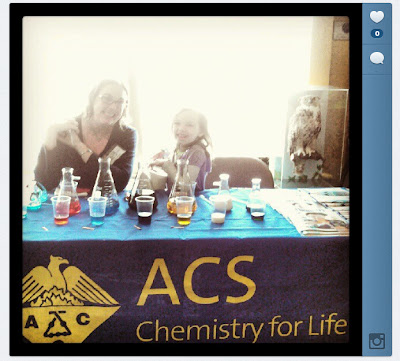 Before my six year old went to sleep that night she told me that today's festival was the best one we have ever done. It was her favorite. I told her it was my favorite too. Some serious mother-daughter bonding took place while working the chemistry table together. I'm glad we decided to volunteer instead of just attend. Sometimes it really pays to be a VIP. 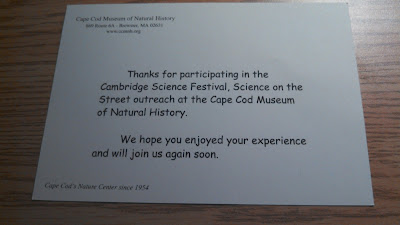 This research paper is part of the Arsenic Contamination in Food and Water symposium Agricultural & Food Chemistry Poster Session which precedes the two day oral symposium at #ACSNOLA. 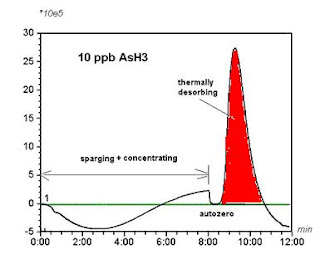 Comparison of sensitive methods for the measurement of inorganic arsenic in apple juice: Photoionization (PID) and ICP-MS

This will be presented in the Analytical Methods subsection of the two day Arsenic Contamination in Food and Water Symposium at the American Chemical Society Spring National Meeting in New Orleans April 10 and April 11, 2013 on the AGFD Track.
299 - Comparison of sensitive methods for the measurement of inorganic arsenic in apple juice: Photoionization (PID) and ICP-MS 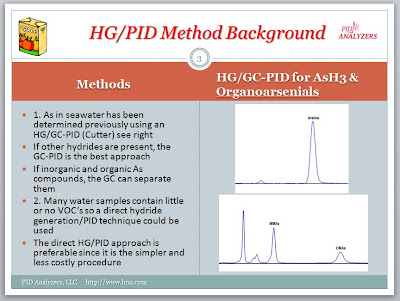 In January of 2012, Consumer Reports found 10% of apple juice samples tested from five brands had total arsenic levels above the drinking water standard of 10 parts per billion. Most of that arsenic was inorganic arsenic, a known carcinogen. American apple juice is made from apple concentrate, a majority of which is imported from China. Inorganic Arsenic has been detected as AsH3following reduction via AA or ICP MS. The cost of these types of spectrometers is in the $60-200K price range. Many labs would have to choose the older colorimetric methods but we have developed and modified the hydride generation-PID method for arsenic in water analysis at ppb levels (1) to work with food and juice. The system cost is a fraction of the $200K spectrometer price. We will describe the modifications of the new method for arsenic in apple juice as well as the comparison results with ICP-MS. (1) Driscoll, JN and GA Cutter, “Total and Speciated Arsenic Compounds in Water by Photoionization and Gas Chromatography/PID”in "Toxic Trace Metal Remobilization & Remediation - A Geochemical Body of Work" to be published by the ACS (2013)


Speakers &amp; Affiliations for Arsenic Contamination in Food and Water two day event at #ACSNOLA by Jennifer Maclachlan
at March 26, 2013 No comments:

Email ThisBlogThis!Share to TwitterShare to FacebookShare to Pinterest
Labels: #ACSNOLA, analytical methods for arsenic analysis, arsenic in apple juice, arsenic in food, arsenic in juice by GC/PID, PID and ICP-MS

Together with our friends at Hillsborough Scientific we will be exhibiting at Arablab 2013 in Dubai 10th-13th March.

The PID Analyzer products that will be displayed at Arablab Stand No: 816/916 are: Model 102+ portable hydrocarbon analyzer, customize with up to 3 additional sensors, Model 210 paramagnetic oxygen analyzer and Model114 IR-based analyzer for leak detection, environmental, area, or laboratory monitoring applications. 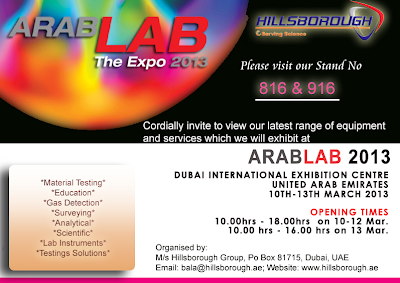 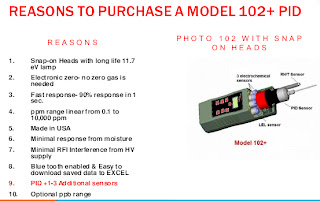 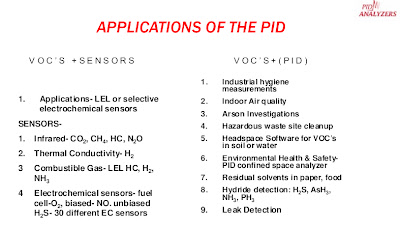 Here is a recent presentation that we did on our Model 102+, one of the featured portable analyzers which will be on display at Arablab and at the Quadrex Corp booth #1202 at Pittcon 2013 in Philly. 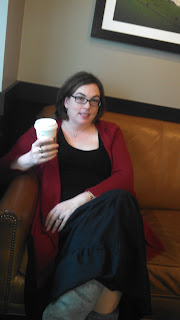 This presentation has been accepted for the technical program of the 245th ACS National Meeting that will be held in New Orleans, Louisiana, April 7-11, 2013. 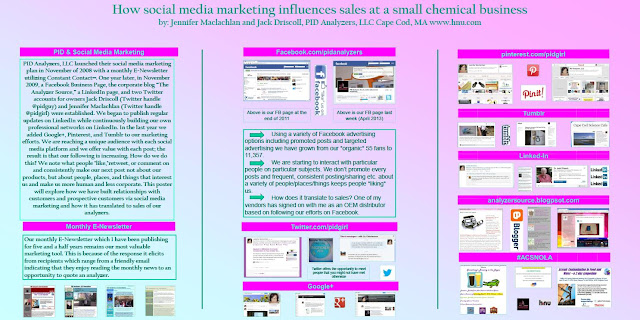 PID Analyzers, LLC launched their social media marketing plan in November of 2008 with a monthly E-Newsletter utilizing Constant ContactTM. One year later, in November 2009, aFacebook Business Page, the corporate blog “The Analyzer Source,” a LinkedIn page, and two Twitter accounts for owners Jack Driscoll (Twitter handle @pidguy) and Jennifer Maclachlan (Twitter handle @pidgirl) were established. We began to publish regular updates on LinkedIn while continuously building our own professional networks on LinkedIn. In the last year we addedGoogle+, Pinterest, and Tumblr to our marketing efforts. We are reaching a unique audience with each social media platform and we offer value with each post; the result is that our following is increasing. How do we do this? We note what people "like,"retweet, or comment on and consistently make our next post not about our products, but about people, places, and things that interest us and make us more human and less corporate. This poster will explore how we have built relationships with customers and prospective customers via social media marketing and how it has translated to sales of our analyzers. 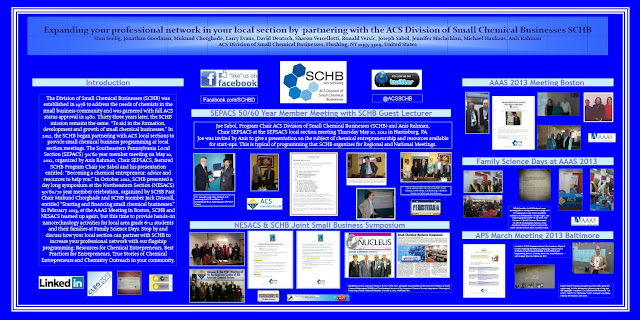