This is the second time the Sandwich Public Library has hosted the award-winning Cape Cod Science Cafe for families. The first time was in 2011 during the International Year of 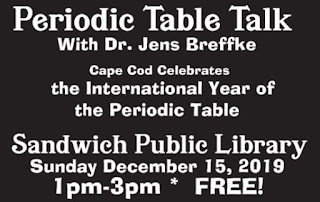 Chemistry which featured hands-on activities related to healthy kids. This time around we are adding the Periodic Table Talk lecture for older learners so we can offer something for every science enthusiast. Hands-on Periodic Table themed activities will be led by three local sections of the American Chemical Society: The Northeastern Local Section (of which Cape Cod is part of), the Lehigh Valley (Pennsylvania) and the Rhode Island Local Section. PID Analyzers, LLC, Palladium Science Academy, Scientists are Superheros, too, Cape Cod Learning Tours, Smithers Viscient, LLC. PiRShared, and Marine Educators, Eben Franks will be leading hands-on activities related to the Periodic Table of the Elements. 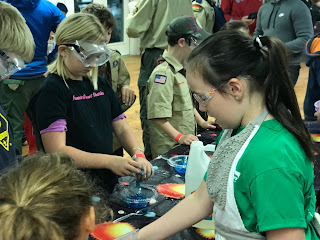 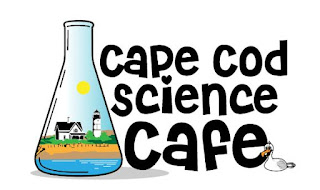 The Cape Cod Science Cafe is a cooperative effort between Sandwich-based business, PID Analyzers, LLC and the Northeastern Section of the American Chemical Society to create a social and educational forum where scientists and the general public, including students, can meet in a relaxed atmosphere and fuel their passion for science and STEM-related fields.

What to expect If you plan to attend the event: Please RSVP if you want to attend the lecture as seating is very limited. Use this link to reserve your tickets: http://bit.ly/ScienceSundayFundaySPL There are 1pm and 2pm lecture seatings available. Tell your friends and family to come on down to the Sandwich Public Library for free hands-on science activities that will run continuously from 1pm-3pm. We hope you can join us at Science Sunday Funday at the Sandwich Public Library.
at December 09, 2019 No comments:

The American Industrial Hygiene Association (AIHA) has launched an action alert titled Young Worker Health and Safety Policymaker Meeting Request with a pre-written letter to your LOCAL policymakers. All you have to do in click on the link below, fill in your name and address and click on START WRITING, which opens up a letter to your policymakers (you can select the letter as is or customize it if you wish), then click SEND.

Advocate for the education of young workers so that they are able to identify and correct workplace hazards and teach them to expect a safe and healthy workplace. Take action now.

Science in Your Swimsuit (3rd annual) 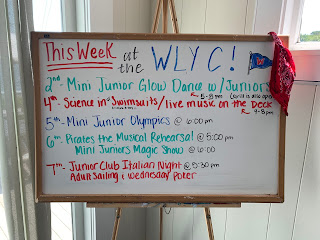 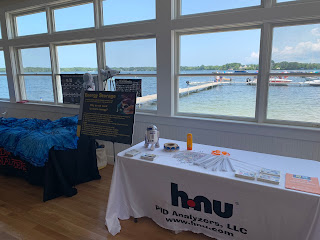 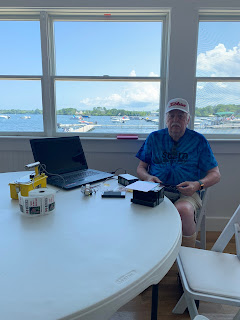 The Teen Workplace Health & Safety Task Force has served the IH/OH profession well since its formation in 2018. They have developed materials for all IH/OH professionals to use for community outreach, lobbied their state legislatures, and are now posing a challenge to all IH professionals… isn't education about teen workplace health and safety our professional responsibility to undertake? Come out to learn more about the progress of the task force; check out the free, ready-to-use tools they have developed; and hear why your peers challenge you to help this movement.Presented by: Jennifer Maclachlan, PID Analyzers.
at April 23, 2019 2 comments:

ACS CIEC Roapmap to programming and social events for industrial and entrepreneurial chemists posted by Jennifer Maclachlan on Scribd
at March 30, 2019 3 comments: 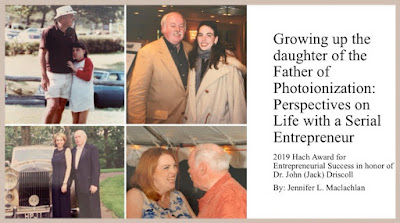 Photoionization detector for gas chromatography: From inception and PPB analysis of VOC’s to PPT analysis of heavy metals

The 2019 Kathryn C. Hach awardee, Dr. Jack Driscoll will share his experience with
photoionization, which began in 1967 with a program on a NASA project, "A
Photoionization Mass Spectrometer for Contaminant Gases in Space Cabin
Atmospheres”. The project was successful but was not renewed. The technique was
very interesting to Driscoll and he felt that it had excellent potential as an analytical tool.
The work continued a number of years later when he started HNU Systems to develop
photoionization based analyzers for industrial hygiene and gas chromatography
markets. His company sold more than 50,000 of these analyzers. Recently Driscoll
discovered that the PID could be used with hydride generation coupled to GC/PID to
detect ppb levels of many heavy metals in food, water, juices, etc. The technique was
applied to detection of ppt levels of Hg using a gold amalgam to concentrate samples
specifically for Hg. The PID remains as a very sensitive technique for the analysis on
VOC’s and heavy metals and he will discuss the results and analytical impacts of these
measurements.

Growing up the daughter of the father of photoionization: Perspectives on life with a serial entrepreneur

Dr. Jack Driscoll is the 2019 Kathryn C. Hach Award for Entrepreneurial Success
awardee and his daughter and business partner, Jennifer Maclachlan, will share
anecdotes of growing up Driscoll: With a father who pioneered the life saving hand-held
photoionization detector in the 1970's, acquired numerous analytical instrumentation
companies including European businesses, started and remains on the board of
directors of the world's largest privately-held in-vitro diagnostics company, a passionate
advocate for education, an avid science fiction fan and a beloved volunteer to the
Northeastern Local Section of the American Chemical Society.

Chemical oceanography studies the chemistry of the planet’s oceans in relation to their
physics (circulation), geology (sources of materials), and biology. These studies include
organic, inorganic, and physical chemistry aspects. However, seawater is a high ionic
strength medium whose constituents besides the major ions that make up salinity, are
at micro- to femptomolar concentrations. This imposes substantial analytical problems.
In addition to low concentrations, many constituents are volatile (e.g., dimethyl sulfide)
or unstable with storage (e.g, FeII), necessitating determinations at sea – consider your
lab moving constantly in 3 dimensions. The photoionization detector coupled primarily
with gas chromatography is ideally suited for chemical oceanography due to its small
size, limited need for specialized compressed gases, simple and robust construction,
and extremely low detection limits for a variety of inorganic and organic molecules. This
talk will illustrate these features using the shipboard determinations of hydrogen sulfide
and metalloid chemical speciation as examples.

The Small Business Innovative Research program (SBIR) which sets aside 1.7% of 12
Government Agencies R&D budget for small businesses was initiated by the work of Dr.
Arthur Obermayer and Senator Kennedy. Obermayer’s Company, Moleculon, received
the first SBIR Grant from the NSF in 1982 for $25,000. Obermayer worked with Bush
and Dole to ensure that the patent rights went to the Company that developed the
product and not to the government. Obermayer continued to work with Kennedy and
other congressmen to expand this program to other agencies and their R&D budgets. In
2018, the SBIR/STTR program budget was $2.3 billion dollars. The total amount spent
of SBIR/STTR was $50 billion dollars. The impact that this has had on small chemical
businesses and the technology workforce will be addressed.
at March 25, 2019 1 comment: 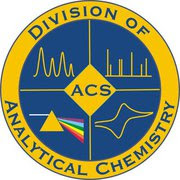 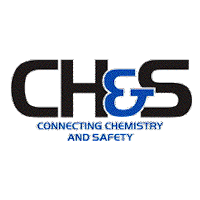 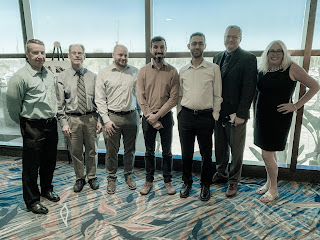 to create what ACS Immediate Past President, Peter Dorhout, calls "an ethos of safety", this symposium will illustrate success stories of various analytical laboratories that effectively connect safety, education, training, and productivity. Speakers included representatives from academic, government and industrial research (both large and small) laboratories.
This symposium was housed on the American Chemical Society's (ACS) Division of Analytical Chemistry Program Track with a collaborative co-sponsorship from the ACS Division of Chemical Health and Safety during the ACS Fall National Meeting in San Diego, CA August 25-29, 2019.

SCHB is the hub for entrepreneurs in ACS

Growing up the daughter of the father of photoionization: Perspectives on life with a serial entrepreneur


Dr. Jack Driscoll is the 2019 Kathryn C. Hach Award for Entrepreneurial Success awardee and his daughter and business partner, Jennifer Maclachlan, will share anecdotes of growing up Driscoll: With a father who pioneered the life saving hand-held photoionization detector in the 1970's, acquired numerous analytical instrumentation companies including European businesses, started and remains on the board of directors of the world's largest privately-held in-vitro diagnostics company, a passionate advocate for education, an avid science fiction fan and a beloved volunteer to the Northeastern Local Section of the American Chemical Society.

Growing up the daughter of the father of photoionization: Perspectives on life with a serial entrepreneur talk time: 1:45pm-2:15pm
at March 07, 2019 1 comment:

Email ThisBlogThis!Share to TwitterShare to FacebookShare to Pinterest
Labels: #pidanalyzers, Dr. Jack Driscoll, Growing up the daughter of the father of #photoionization: Perspectives on life with a serial entrepreneur, Jennifer Maclachlan 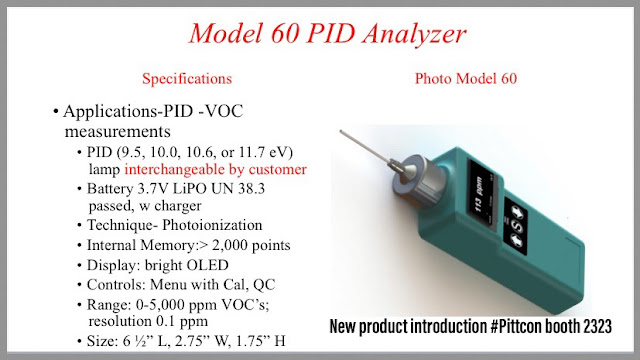