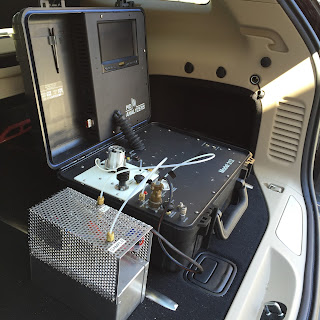 A capillary column gas chromatography method was used for the analysis of sulfur compounds such as hydrogen sulfide, methyl mercaptan, dimethyl sulfide, and dimethyl disulfide in ambient air. The concentration of these sulfur compounds is typically very low (low to sub ppb) in ambient air. Their odor threshold is at the low ppb levels so it is also necessary to make field measurements near odorous sulfur sources such as refineries, pulp and paper mills, etc. because of the high reactivity of the sulfur compounds. A portable gas chromatograph (GC) with a photoionization detector (PID) and concentrator is ideal for this application because of the high sensitivity of the PID to sulfur


compounds and it does not need support gases such as zero air or hydrogen. It has more than 100 times the sensitivity of the flame photometric detector and a much wider dynamic range.
at October 24, 2017 2 comments:

#scicomm panel and discussion at #f17mrs 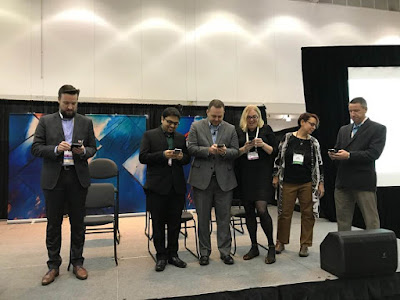 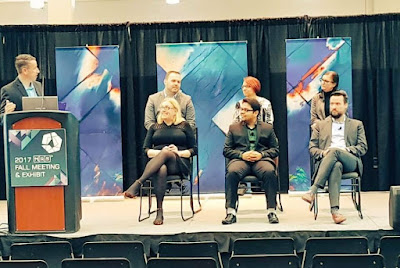 This panel discussed how materials researchers can leverage social media as a networking tool as well as a way to promote their work through the press. 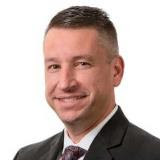 Christopher D. Incarvito has served as Director of Research Operations
and Technology at Yale University's West Campus since 2011. In this
role he leads development of research, faculty recruitment, campus
expansion, sustainability, and has executive oversight for communications
and the Yale Landscape Laboratory. He is responsible for the quality and creation of new research
programming and facilities through collaborative work with faculty, directors, deans, department chairs
and other university leadership. He spearheads an ambitious program of laboratory modernization across
West Campus, delivering a significant expansion of Yale’s science and engineering capacity. He manages
strategic capital investments, deployment of high-value shared research instrumentation laboratories, and
has built successful collaborations with global scientific research organizations. Incarvito earned a PhD degree
in inorganic chemistry from the University of Delaware in 2002. His research interests include the application of
orthogonal analytical instrumentation to complex chemical and biological problems with a focus on x-ray based
techniques. He is an expert in the field of x-ray crystallography and has been recognized with co-authorship of
more than 150 peer-reviewed publications. He serves on a number of university-wide committees and is a member
of the university’s Staff Leadership Council. 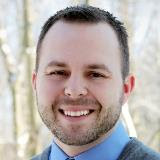 Matt Grandbois is the Strategic Marketing Manager for the Electronics
and Imaging business of the Dow-DuPont Holding Company, where he is
responsible for investor relations reporting for the E&I segment and
focuses on developing new technologies and solutions to the electronics
industry. Grandbois is a member of the American Chemical Society (ACS) Younger Chemist Committee
and is the current Chair of the ACS Division of the Professional Relations Younger Chemist Subdivision.
In these roles, he develops programming at national ACS Meetings aimed at developing professional
skills for young scientists. He has been developing trainings and programs to further improve the
communication skills of scientists while he was part of the University of Minnesota Chemistry Department
Graduate Student Workshop Committee that further spread to his leadership within Dow’s internal early
career scientist development committee. Grandbois has a BA  degree (2004) in chemistry and music performance
from Augustana College and a PhD  degree (2010) in chemistry from the University of Minnesota. He was a 2008
Fulbright Scholar to Norway, where he studied the relationship between technology and society at the Norwegian
University of Science and Technology. 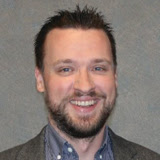 Ken Haenen is Professor and Chair of the Department of Physics,
and Director of the Doctoral School of Sciences and Technology at
Hasselt University, where he obtained his PhD degree in physics in
2002. He is also a guest professor at IMEC. His research interests
focus on CVD diamond, including its deposition, optoelectronic characterization, surface
functionalization, and diamond-based devices, as part of a broader scope on carbon materials
for energy harvesting and conversion. He is a 2017 volume organizer for MRS Bulletin and
Editor-in-Chief of Diamond and Related Materials. Haenen is involved in the organization of
several leading international diamond and nanocarbon conferences, including the International
Conference on Diamond and Carbon Materials (Chair), Hasselt Diamond Workshop (Co-chair),
and New Diamond and Nano Carbons (Executive Committee); he organized MRS symposia on
carbon functional interfaces at the 2011 and 2013 MRS Spring Meetings; and he served as a Meeting Chair of the 2015 MRS Spring Meeting. 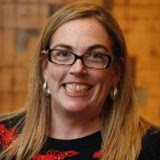 As a co-owner and sales manager of PID Analyzers, LLC, Jennifer L.
Maclachlan is responsible for managing relationships with distributors
and key clients as well as the web-based marketing, social, and digital
media initiatives, of which she was an early adopter. Maclachlan is
the Chair of the American Chemical Society (ACS) National Committee on Public Relations
and Communications (CPRC) and Chair of the ACS Multidisciplinary Program Planning Group
(MPPG), which is responsible for determining themes and selecting theme leaders for the
ACS National Meetings. She is a founder of the Cape Cod Science Café, which she started in 2011, with support from the Northeastern Section of the ACS (NESACS) and an International Year of Chemistry (IYC2011) mini-grant.
This program has continued to gain popularity and the 21st Cape Cod Science Café will take
place on March 3, 2018, within  a large public outreach event, STEM Journey, of which she
is a founding member and organizer. STEM Journey is an award-winning K–12 annual public
outreach, daylong event with collaborative efforts from the ACS Local Section (NESACS), the
Cape and Islands Boy Scouts, Sandwich STEM Academy, and PID Analyzers, LLC.
Maclachlan is the Chair of the American Industrial Hygiene Association’s Task Force on
Safety Matters, and is currently piloting the Safety Matters training program for young workers
in her local community of Cape Cod, Massachusetts. In September 2017, Maclachlan
contributed a book chapter to Communicating Chemistry Through Social Media, ACS Books
Publishing. 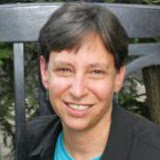 Judy Meiksin is News Editor for the Materials Research Society,
where she is responsible for generating content for news and features
for MRS Bulletin, the Materials360® Newsletter, and Meeting Scene®.
She has taught writing for over 20 years, including courses at the
University of Pittsburgh and the School of the Carnegie as well as invited workshops, most
recently at the College of William and Mary and at the Center for Study of Science,
Technology & Policy (Bangalore). She has her BA degree (1983) from Carnegie
Mellon University and MFA degree (1989) from the University of Pittsburgh, both in Writing. 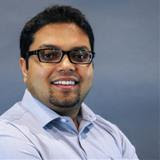 Rahim Munir is a doctoral candidate at King Abdullah University of
Science and Technology (KAUST) and affiliated with the KAUST
Solar Center (KSC), where he works on understanding the
structure-properties-performance relationship for perovskite
solar cells. He completed his MSc degree from the Korea Advanced Institute of Science
and Technology (KAIST). He leads a team of scientists from KAUST to perform x-ray based
experiments at Cornell High Energy Synchrotron Source (CHESS). Munir is an active
member of the Materials Research Society (MRS) and played major leading roles in the
MRS-KAUST Student Chapter. He publishes articles on his personal blog and is a volunteer
science writer for MRS Bulletin. He has given several invited talks about leadership and
communication skills and has encouraged students of Saudi universities to pursue science
and engineering as their career. Recently, he organized the “Academic Writing” symposia
during the 2016 MRS Fall Meeting in Boston. In his free time, he enjoys reading Oriental
philosophy. 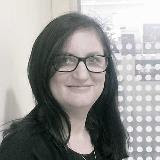 Jo Skelton has been a part of the Academic Marketing team at
Cambridge University Press (CUP) for the past nine years. In her
current capacity as Society Marketing Manager, she heads a team
of marketing executives developing innovative marketing strategies
for a number of society journals, which includes the Materials Research Society publications.
During her time at CUP, Skelton has spearheaded a number of key projects including the
creation and continued development of the Cambridge Core blog and the adoption of the
social media management tool Hootsuite, which is now used throughout the Press. Skelton
has particular interest in the fields of web analytics, social media and data-driven marketing
insights.
at October 23, 2017 No comments:

Email ThisBlogThis!Share to TwitterShare to FacebookShare to Pinterest
Labels: #f17mrs. #scicomm. scicomm panel discussion, Science communication: How to use social media for connecting with colleagues and the press 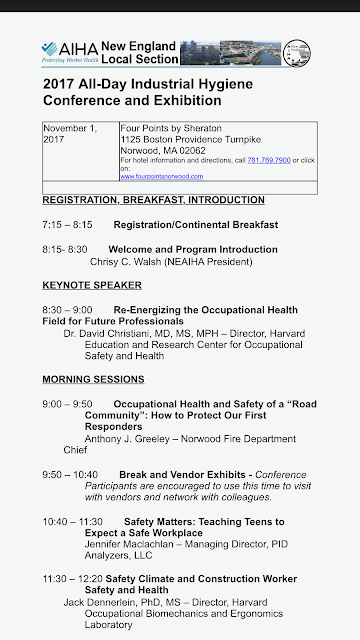 CONFERENCE REGISTRATION DETAILS
Pre-registration for NEAIHA members will be available through the Memberclicks link on the NEAIHA website. Registration link: https://anels.memberclicks.net/index.php?option=com_mc&view=mc&mcid=form_243100
ABIH CERTIFICATION MAINTENANCE
Attendance receipts for certification maintenance purposes will be available at the door.  This event contains 7.5 technical contact hours, and may be eligible for ABIH CM credit.  See ABIH web site for CM credit criteria.
at October 09, 2017 No comments: 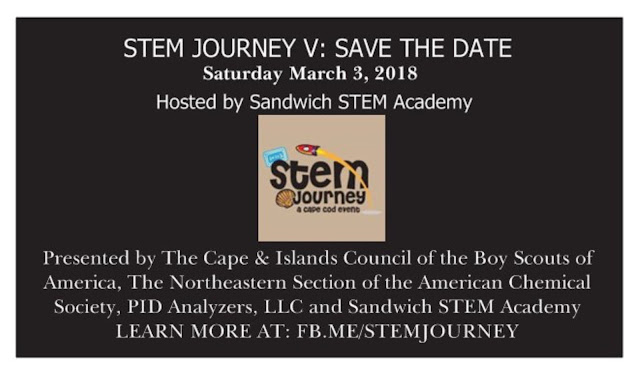 We're seeking STEM stakeholders to join us on our STEM Journey, Saturday March 3, 2018 from 11am-5pm, and bring hands-on STEM activities/demonstrations that are interesting to students in grades K-12. The 2018 theme is Robotics in the 21st Century!

Contact Jennifer Maclachlan to learn how you can participate by being a hands-on activity exhibitor or event sponsor.
at October 08, 2017 No comments:

I've just completed my Chair-Elect duties and have assumed the role of 2018 Chair of The ACS Multidisciplinary Program Planning Group (MPPG). Last week I updated my Linked-In profile to reflect the change and have been delighted to receive so much feedback from my connections about this exciting opportunity to work closely with ACS technical divisions and their representatives. "MPPG identifies and selects national meeting themes to promote collaborative, multidisciplinary, Society-wide programming for ACS National meetings.  This multidisciplinary programming reflects the multidisciplinary nature of the modern scientific enterprise, breaks down barriers to collaboration, and provides opportunities for outreach to nascent and existing communities of scientists who are practicing chemistry.
MPPG has representatives from nearly all technical divisions, as well as representatives from programming committees".
MPPG has two subcommittees:
What's new with MPPG? In the coming weeks, MPPG representatives will have an opportunity to choose which subcommittee they would like to serve on. Additionally, the structure of the in-person meetings at the ACS National Meetings will change to reflect the needs and time concerns of this group including participating theme leaders.To represent the broad interests of the society, it is critical that we have a participatory members from each of the technical divisions at our meetings, even if the designated representative or alternate cannot attend.

As part of my MPPG Chair duties, I am responsible for sourcing themes and theme leaders for the 2021 spring and fall ACS meetings. Note that it is possible to partner as theme leaders. The 2021 meeting dates are:

Current themes and theme leaders are as follows:

Please contact me with theme ideas and/or theme leader candidates.