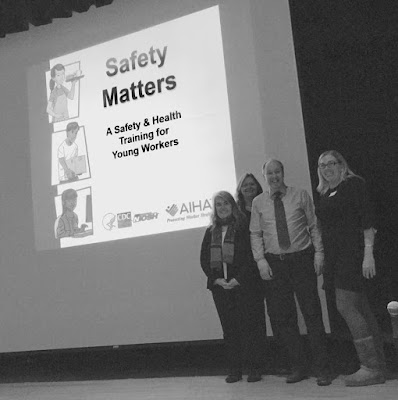 'Safety Matters' has officially been launched on Cape Cod. I gave three back-to- back presentations to over 100 7th graders who attend the Monomoy Regional Middle School in Chatham, MA (Cape Cod) on Friday December 16, 2016. The 7th grade students had an abbreviated schedule: 30 minute blocks of curriculum today instead of the usual 50 minute blocks to accommodate an enrichment at the end of the day facilitated by the Museum of Science. I presented the 'Safety Matters' training module to each of the three groups during their science block in the auditorium.

What exactly is 'Safety Matters'? Safety Matters is an educational module developed jointly by the National Institute of Occupational Safety and Health (NIOSH) and the American Industrial Hygiene Association (AIHA) designed to be facilitated by AIHA member volunteers, like myself, grassroots-style, in their own communities to students in grades 7-12. The intention of this program is to provide general awareness of potential safety hazards on the job and teach young workers how to identify these hazards and ultimately to prevent job-related injuries by knowing their rights to a safe and healthy workplace. Ideally, once a set of students are trained, the teacher can add the training materials into their curriculum for the following year. 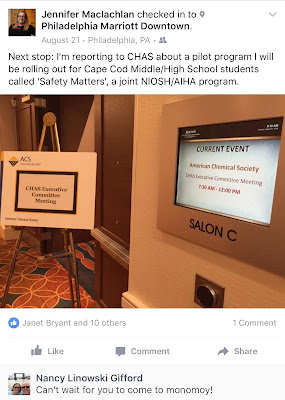 Why launch at Monomoy? Why not Barnstable (where I live) or Sandwich (where I work) both of which are where I usually do my science education outreach programs like the Cape Cod Science Cafe, Wicked Cool Autumn Welcome or STEM Journey? In my experience, part of being successful with this type of program launch is launching where people WANT the programming. I announced on Facebook last August that I was pitching the pilot program 'Safety Matters on Cape Cod' to the American Chemical Society Division of Chemical Health and Safety Executive Committee seeking their endorsement since this type of education program is in their wheelhouse. Here's the link to Monomoy: Nancy Gifford, my friend and fellow organizing partner on the aforementioned science outreach events, commented on my Facebook post that she "can't wait for [me] to come to Monomoy". So that's how Monomoy claimed the premiere of 'Safety Matters'. The Cape Cod Chronicle was kind enough to send reporter Alan Pollock to cover the story. Read it here. 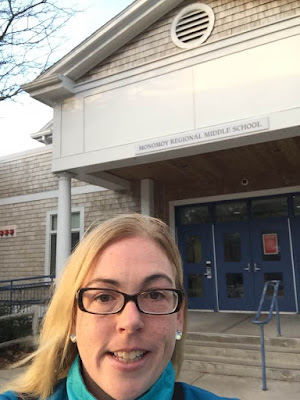 NIOSH and AIHA did a spectacular job preparing the Safety Matters materials for volunteers to use. Notably, in each of the three groups I had students share about someone that they knew who had been injured on the job. These were common injuries that included slips, trips, falls, and one student mentioned that his father hurt his back while taking a lobster trap out of the ocean. Having these discussions throughout the presentation really engaged the students, the embedded videos in the presentation (particularly 'Mallory's Story) evoke emotion, although there is a tendency for the students to 'blame the worker' in these scenarios and I kept stressing that the worker has a right to a safe workplace. I passed my laser pointer around to the students during the segments where there are illustrated drawings of some 'very unsafe' workplaces. This was a huge hit and really made the students part of the presentation.

My goal for 2017 is to bring 'Safety Matters' to all of the Cape and Islands school districts. Call it a bit of the 'go big or go home' sentiment but having the ability to achieve something so impactful across the region like helping shape the safety culture for young workers is pretty amazing. And I'm lucky to have the support of my company, PID Analyzers, LLC (allowing me the time this project will take) and the publicity my professional societies  AIHA and ACS will give me,  so I can share my 'Safety Matters on Cape Cod' story.

I'm scheduled to go back to Monomoy in January to present to those that missed the presentation today.

Email ThisBlogThis!Share to TwitterShare to FacebookShare to Pinterest
Labels: #safetymatters 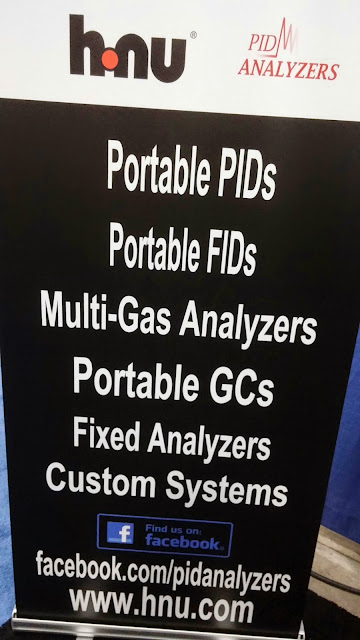 We introduced our newest portable analyzer, the GC 121, at the New England Local Section of the American Industrial Hygiene Association all-day technical conference in Sturbridge, MA on Tuesday October 18, 2016.


The following week we were a proud Silver Sponsor of the American Industrial Hygiene Association Fall Conference in San Antonio, TX October 23 and 24, 2016. Learn more about us and our products here 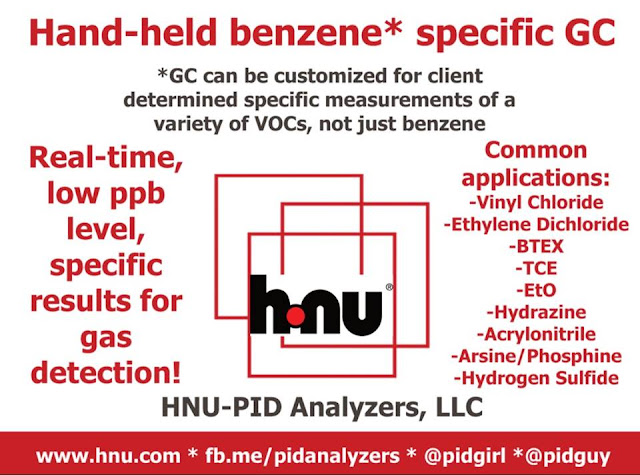 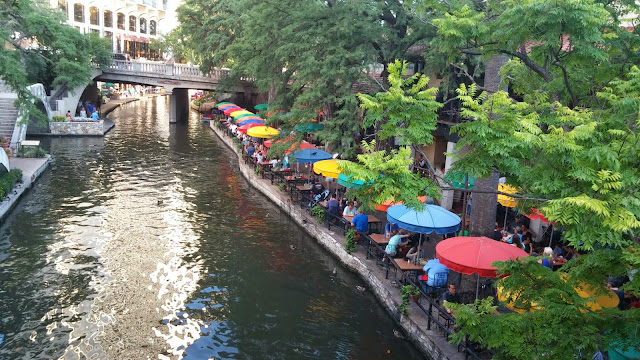 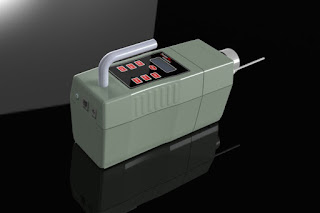 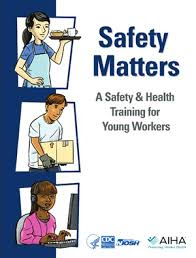 On Friday December 16, 2016, I'll be rolling out the education module 'Safety Matters' to the 7th grade at the Monomoy Regional Middle School in Chatham, Cape Cod.

This general awareness training program developed jointly by the National Institute of Occupational Heath and Safety (NIOSH) and the American Industrial Hygiene Association (AIHA) is designed to teach young workers how to identify workplace hazards and know their rights as workers.

Why is this important? Here are some statistics you may not know:
As you may know, if you follow any of my social media, I'm an avid volunteer for the American Chemical Society (ACS) and serve in various public relations leadership roles. Notably, American Chemical Society CEO, Tom Connelly described an interest in partnering with other professional societies on chemical and lab safety issues in his June 27, 2016 comment titled ACS's Role in Safety in Chemical and Engineering News. This got me thinking about potential partnerships between the ACS and AIHA. It seemed logical to me to get the ACS involved in this particular education outreach effort because of its central workplace safety message; especially the American Chemical Society Division of Chemical Health & Safety (DCHAS). So I pitched the idea to the DCHAS Executive Committee at the recent Fall National Meeting of the American Chemical Society of having DCHAS 'endorse' my efforts to bring 'Safety Matters' to Cape Cod students, as well as my own local ACS section: Northeastern Local Section and NEAIHA, my AIHA Local section. The overall goal in partnering with so many groups is for me to report back with a 'best practices on how to implement 'Safety Matters' in a way that will inspire and guide members of the various groups/subgroups I have engaged, to encourage their members to bring this program to their own communities. Eventually, once I've completed this pilot program on the Cape & Islands, I'd like to tap into the ACS Local Section networks, there are 187 of them, who have outreach activities in place for National Chemical Week in the Fall and Chemists Celebrate Earth Day in the Spring and have their interested members use their community connections to bring 'Safety Matters' to those grade 7-12 educators. Ultimately, once the teachers are introduced to 'Safety Matters' by a volunteer, they can access more in-depth workplace safety programs for young workers that can be added to their curriculum.

I am grateful to have the support of the ACS Office of Public Affairs, Tom Connelly, DCHAS and NESACS as well as the AIHA Board of Directors, AIHA CEO Larry Sloan and the NEAIHA Executive Committee as I launch 'Safety Matters' Cape-wide.
at December 09, 2016 No comments: