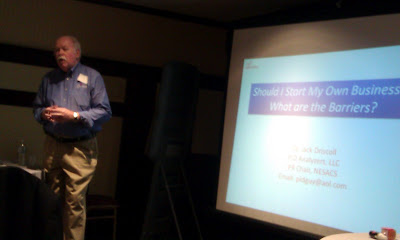 Will you be at #ACSPhilly on Sunday August 19, 2012? Stop in at 8am for a full day of entrepreneurial programming brought to you by the Small Chemical Businesses Division of the American Chemical Society. Commencing four days of technical programming with flagship SCHB programming: True Stories of  Success from Chemical Entrepreneurs and concluding with Terahertz Spectroscopy moves from the laboratory to the commercial sector, this technical program promises to offer something for each entrepreneurial spirited individual in attendance.

I'll be greeting at the Sunday SCHB program-you'll find me outside the door at the Grand Ballroom Salon I & II, Philadelphia Courtyard Downtown Hotel, 21 N.Juniper St. I won't be telling my true story this time around. I got to take the podium at the Spring National Meeting and my recorded presentation is available here.

Just after a combined true stories and best practices panel is the Marketing & Technical Sales for startups and growing businesses designed as a how to workshop addressing marketing on a tight budget to business development skills for technical entrepreneurs. 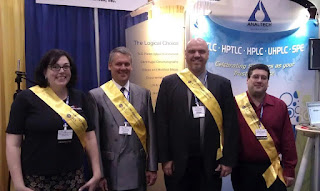 Then as if this Sunday programming couldn't get any better, comes the symposium that I organized and am presiding over: How small businesses grow and increase sales using social media featuring Ken Grant, dubbed by fellow Delawareans as *The Godfather of Social Media*.
Join us: listen, learn and participate in the Small Chemical Businesses Division of the American Chemical Society technical program at the Fall National Meeting in Philly. Program highlights are available in the August issue of the Small Chem Biz Newsletter here.

Last Wednesday, after working in the morning at the office, I picked my daughters up at camp and decided to go to the beach for a quick social with the other moms and a cool down swim as temporary relief from the multiple days of mid-July mugginess.
As we were de-sanding and packing the beach accessories in the car, I checked my email, Twitter and Facebook notifications again before driving home where I would resume working.

I was mentioned in my friend, Lisa a.k.a. @sierratierra's tweet about the coastal storm warnings on Cape Cod. I met Lisa in Boston earlier this year at her How Pinterest Can Be Your Business’ Secret Social Media Weapon .


That makes sense why Lisa would tag both Kathryn and I in the severe weather post-we're both Twitter users from Cape Cod.
Kathryn Siranosian ‏@CorpWriters
@sierratierra Stay safe! Maybe I *won't * be playing tennis tonight, after all? @pidgirl #capecod
Expand

My intuitive self told me that I had to meet Kathryn immediately. So I invited her to come meet my father and I.

Jennifer Maclachlan ‏@pidgirl
@CorpWriters Neat! Our facility is in Sandwich-you should come by and meet myself and my father @pidguy.

Jennifer Maclachlan ‏@pidgirl
@CorpWriters How is Monday 10 am? We're on RT 130 between the car wash and the Industrial Park No. 2 Washington Cir. (behind the Hess)
Expand

19 JulKathryn Siranosian ‏@CorpWriters
@pidgirl That could work! I will have to check w/my daughter's schedule tonight. I will RSVP asap.
Hide conversation
3:25 PM - 19 Jul 12 via TweetDeck · Details

Kathryn Siranosian ‏@CorpWriters
@pidgirl I'll stop by tomorrow morning, if that still works for you . . .
Hide conversation
10:41 AM - 22 Jul 12 via TweetDeck · Details

This is where I set the stage for our discussion.

Jennifer Maclachlan ‏@pidgirl
@CorpWriters sounds good! Looking forward to telling you about all the cool science events we do on the Cape :)
View conversation

Kathryn arrived at 10am and we spent a few minutes chatting about our children and their summer science related programs and then we got into our science outreach activities: including the Cape Cod Science Cafe series for both adults and the hands-on cafe for kids/families. Kathryn was familiar with the event that we did last year at the Sandwich Public Library and she is eager to help us organize and promote a similar, larger scale event this December. With her connections to the Sandwich Public School system and her passion for STEM education dubbing her family a "STEM family" we've got ourselves an amazing new Cape Cod science outreach team member!

Of course we took a picture and I sent this tweet:
Jennifer Maclachlan ‏@pidgirl
Tweetup in Sandwich this am! Thanks to @sierratierra for connecting the #capecod science tweeps @CorpWriters @pidguypic.twitter.com/2EJSnlOf
View photo 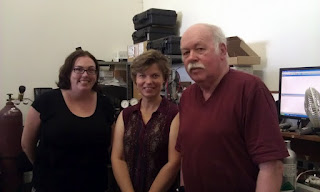 20hLisa Kalner Williams ‏@sierratierra
@pidgirl @CorpWriters @pidguy That is AWESOME! Glad you got to meet each other! Thanks for sending me the proof :)
Hide conversation
12:27 PM - 23 Jul 12 via HootSuite · Details

Then, as if this wasn't amazing enough to have made this local science connection, this is the response from one of Kathryn's contacts:

23 JulBob Egan ‏@bobegan
@pidgirl @CorpWriters @pidguy I’m in - there are also several others on the cape that follow me / i follow who might be interested.
Hide conversation
2:19 PM - 23 Jul 12 via Tweetbot for iOS · Details